There are only two historical districts in all of DeKalb County and Soapstone Ridge is one of them. Unlike the Druid Hills Historical District, Soapstone is primarily devoted to preserving archeological sites. The area of this historic district amounts to roughly 16 square miles in total and contains many archeological sites, including Late Archaic quarry sites dated between 600 BCE and 1500 BCE.
Furthermore, Soapstone Ridge is the location of the most extensive group of Native American soapstone quarry and workshop sites in the Southeast. At least 17 quarry sites and 23 workshops sites have been located on the ridge. The mineral soapstone (also called steatite) was used extensively by Native Americans to create large stone bowls, pipes, and ornaments.

As the population of DeKalb County—and District 3—continues to grow, residential development has begun encroaching on the area more and more. However, a study conducted by the DeKalb County Planning Commission in 1976 analyzed soils, hydrology, botany, zoology, and land use patterns indicate that the area maintains considera-ble environmental and cultural integrity . That being said, recent residential develop-ments have continued as the study anticipated, making it more important now than ever to preserve the site. 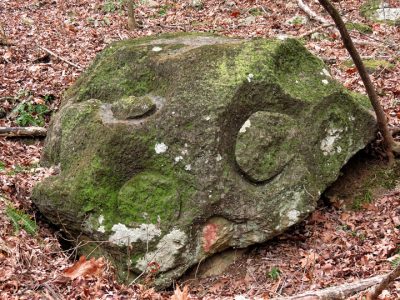